Today was the final nest raid for the first clutch.  Makahu had been incubating for 115 days with no sign of a hatch and he looked like abandoning, so Deb and David went in to change his transmitter.

Makahu’s transmitter battery was rapidly losing power for some unknown reason. Another problem was that he was still nesting but was up to 115 days. The usual incubation period is about 78 days. They thought he had either switched nests at some stage or was sitting on dud eggs.

Much to their surprise, there were two chicks in the nest!  What a bonus.  Both were good strong chicks who had been out feeding themselves. Their estimated ages were 21 days and 12 days.  They are now in the crèche. 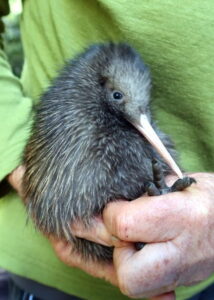 Makahu G is thought to be 21 days old.

Ren E is still down at Massey Wildbase.  He was operated on to remove an infected yolk sac and is now recovering.  Many thanks to Bev for spotting the problem – without intervention, he would have died.

Most chicks in the crèche are putting on exceptional weight gains, thanks to the damp conditions being ideal for insect life.

Chicks from eggs will stay at Westshore until they are more than 1000g before being released back into the wild.

We will be resuming educational talks at the crèche in a few weeks – the first group is home-schooled children.

Deb and Dave raided Ren’s nest – they were hoping for two chicks but the older one had scarpered. The younger chick (Ren E) was brought out and taken to Westshore. He was about six days old.

By Saturday, Ren E was causing some concern – he had a large yolk sac positioned quite high causing him some mobility and breathing issues. Bev decided he needed transferring to Massey Wildbase where he has been given IV fluids and antibiotics – they will also ultrasound his yolk sac.

A big thank you to Anne C for driving to Palmy and back with very short notice.

Some sad news from the crèche. Over the weekend, Lionheart D was found dead. It was a very unusual event; a twig had become caught in his transmitter and he was unable to free himself. He wasn’t very far from his release site so probably got snared within a few days of release two weeks previously.

On Monday 17 October, health checks and routine dosing was carried out on Ridler A and Blew R. Ridler A was doing very well, gaining 102g in 19 days. At 29 days old, he weighed 400g. Unfortunately, Blew R wasn’t doing so well. He was 23 days old and weighted 305g. This was less than expected and a poo sample showed he had an intestinal worm infection. He was routinely dosed at the health check and this, along with a good food supply, means he should make a good recovery. He will be given further medication on 31 October.

Johno R egg has hatched. He will be raised at Westshore until he weighs 1000g and then released back into the wild.

Another nest raid today – Johno this time.  Fi, Robyn and Peter came away with a 10-day-old chick (Johno Q) and an egg (Johno R).  Bev has candled the egg – it’s internally pipped and probably about four days away from hatching.

Marilyn and Peter have taken Johno Q up to the crèche, where the numbers are steadily rising.


Monday was the first health check day of the season.  It was a big turnout – Marilyn, Peter and grandson Finn, Anne C and grandson Liam (it’s school holidays), Ann J, Amy, Matt, myself…

Blew S was released first thing after a feed of worms on the trip up.  His nest was raided on 6 October – he was about six days old and had a very big yolk belly so was taken to Westshore for a few days TLC. His sibling, Blew R, went direct to the crèche. Fiona says that we were lucky to get the two Blew chicks because a trail camera showed a stoat entering the nest!

We had two chicks on the list to dose. Unfortunately we couldn’t get a signal for Mr JC E (might be a failed transmitter – I’ve put him down as AWOL for now but we will keep looking). We caught Hoover N after a steep climb out the back.  He was doing amazingly well – gaining 120 g in 18 days!  The insects are thriving in the wet and (mostly) warm spring.

We did see some dead birds, possibility casualties from the recent polar blast: a tui, a kereru and a starling on the tracks plus a young shag in the lake.

This season we are only putting chicks hatched in the wild into the crèche with a limit of 16 chicks. Chicks from eggs lifted at nest raids and hatched in captivity will stay at Westshore until they are 1 kg then released back into the Kaweka FP.

Johno’s nest raid is due this weekend with Makahu, Trick and Ren still to come. 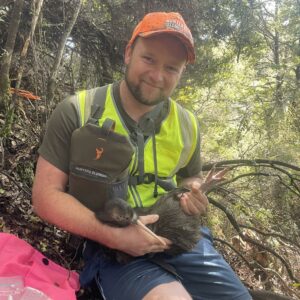 On Sunday, Deb and Tipene raided Lionheart. A week ago it looked like he might abandon but he stuck with it and they came away with a nine-day-old chick (there was also a rotten egg in the nest).

Anne C and grandson Liam took the chick up to the crèche on Sunday evening.

Blew R was a lively 10-day-old chick.  There was still some yolk evident but the bill was dirty so had been out feeding; legs and feet were firm and dark. Probably a female judging on bill length.  Anne C took Blew R up to the crèche.

Blew S was about two or three days old and has gone to Westshore for TLC.

Amy and Nicole helped with dosing and we did some training on fitting transmitters.

The first health check day will be Monday 10 October.

29 September: Ridler A and update

It was a busy day yesterday – Deb and her crew raided first-time dad Ridler and came away with a 10-day-old chick (Ridler A) and an egg which we took to Westshore for assessment.  The egg turned out to be only about 15 days old so would have been laid about the time Ridler A was hatching!  Basically a 2nd clutch egg in the nest with a 1st clutch chick.  The egg had been fertilised but showed signs of interruption to development so Bev and Miriam didn’t think it was viable. Operation Nest Egg (ONE) protocol is to incubate for 10 days then re-assess so the egg will be at Westshore for the next week or two until we know the outcome. Update: The egg proved to be dead. Ari M, emerging from his egg

Anne took Ridler A up to the crèche – he was a lively chick who had been out feeding for himself.  We now have three chicks in the crèche. First health check day should be Monday 10 October. Fingers crossed it isn’t raining.

Other news… Hoover O, the chick that died at Westshore, had an infected yolk sac – most likely picked up in the nest.

Ari M egg hatched yesterday at Westshore – he needed a lot of assistance as he had a foot over his head plus a problem with his umbilicus.

Below is an overview of where we are at –

Unfortunately we had some unexpected sad news this morning. Hoover O, who had been at Westshore kiwi facility, was found to be very unwell – he was unresponsive with serious breathing difficulties. He was taken to the vet and given hydration plus antibotics but died shortly after. His body will be sent to Massey Wildbase for autopsy.

Hoover O was lifted from the nest a week ago. His age was estimated at about two days and, according to Bev, he had been making textbook progress – we had actually been planning to release him into the crèche this Wednesday. This isn’t the start to the season we were hoping for.

Anne C is heading up to the crèche tomorrow. She will check on the two chicks in residence (Mr JC E and Hoover N). Hopefully, they have managed to handle the rain events of the last week or so. Hoover N also spent a night at Westshore. Our on-site camera showed that she had been out overnight four nights in a row; however she was still shaky. She was much perkier when I delivered her to the crèche, and greedily gobbled all the worms I put in the box. The crèche was pretty sodden; and that was before even more rain fell – hopefully the chicks fared okay. They will also have to contend with hawks – four alighted near the beginning of the track and I saw plenty of others over the farmland.

Mr JC’s egg has been sent to The Burrow for incubation. Bev has kept Ari’s egg on site and has been using her considerable skills to keep the chick alive; it’s looking good and on track for a hatch.

Wednesday 16 November, 2022 Lake Opouahi, Kiwi crècheEvery month, a volunteer walks around the outside of the pest-free fence at the Opouahi … END_OF_DOCUMENT_TOKEN_TO_BE_REPLACED 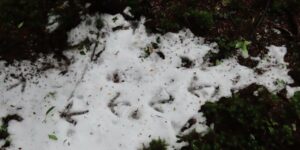 Banner Photo: Kiwi footprints seen by the body of KanukaBack in September, we lost Kanuka, a healthy breeding kiwi. Fi and Chris found his body … END_OF_DOCUMENT_TOKEN_TO_BE_REPLACED

Banner Photo: Hoover caught on camera, feeding at nightWe have been very fortunate to be granted funds from First Light Community Foundation for … END_OF_DOCUMENT_TOKEN_TO_BE_REPLACED

Banner Photo: Ari's egg with its patch (l), and Mr JC's eggAfter the sad loss of kiwi Kanuka, we have some happier news. We had two teams out last … END_OF_DOCUMENT_TOKEN_TO_BE_REPLACED

Top picture: The safety briefingThousands of starlings have been roosting within the crèche at Lake Opouahi, threatening to make it an unhealthy … END_OF_DOCUMENT_TOKEN_TO_BE_REPLACED