SOKK is focused on the Kaweka Forest Park, situated in the central North Island between Hawke’s Bay and Taupo. It contains a mixture of beech forest, kanuka and manuka scrub with pockets of podocarp forest and alpine tussock at higher altitudes.

SOKK is run by the Environment, Conservation and Outdoor Education Trust (ECOED), which  was established in 2002 to halt the decline of North Island brown kiwi in the Kaweka Forest Park.

At that time, the park’s estimated kiwi population was about 200 kiwi. In response to this crisis, ECOED initiated the Save the Kiwi Hawke’s Bay Project, which is now known as Save Our Kaweka Kiwi (SOKK).

Our goal is to restore a healthy population of kiwi in the Kaweka Forest Park by:

In the park, SOKK has established a core breeding population of male kiwi that can be monitored. By checking the data outputs from transmitters attached to the males, we can tell if a kiwi is nesting and, later, if chicks have hatched. When chicks are ten days old, the nest is raided and chicks taken to the kiwi crèche at Lake Opouahi Scenic Reserve for rearing. When funds permit, we are also able to incubate recovered eggs.

Each tagged adult kiwi is also given a health check twice a year, whilst juvenile kiwis returned into the park are monitored every six weeks until they reach 1400g. At that weight, they are classified as adult kiwi.

The project has been involved in a range of other innovations, including:

We have also collected feather and blood samples from our kiwi to be used in kiwi genetic studies, and have developed ways of dealing with kiwi health within the crèche environment.

Banner Photo: Hoover caught on camera, feeding at nightWe have been very fortunate to be granted funds from First Light Community Foundation for … END_OF_DOCUMENT_TOKEN_TO_BE_REPLACED

Banner Photo: Ari's egg with its patch (l), and Mr JC's eggAfter the sad loss of kiwi Kanuka, we have some happier news. We had two teams out last … END_OF_DOCUMENT_TOKEN_TO_BE_REPLACED

Top picture: The safety briefingThousands of starlings have been roosting within the crèche at Lake Opouahi, threatening to make it an unhealthy … END_OF_DOCUMENT_TOKEN_TO_BE_REPLACED 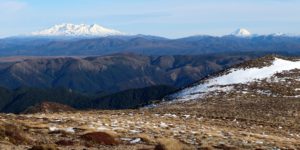 Tom's territory - with Ruapehu and Ngauruhoe in the far distanceTom had been awol for about seven months. We last heard him in mid-December 2021 … END_OF_DOCUMENT_TOKEN_TO_BE_REPLACED 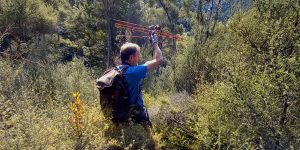 Top picture: David demonstrating his kiwi tracking skillsJuly 20 - The 2022-23 season is under way with six nests on the go. Our first hatch is … END_OF_DOCUMENT_TOKEN_TO_BE_REPLACED